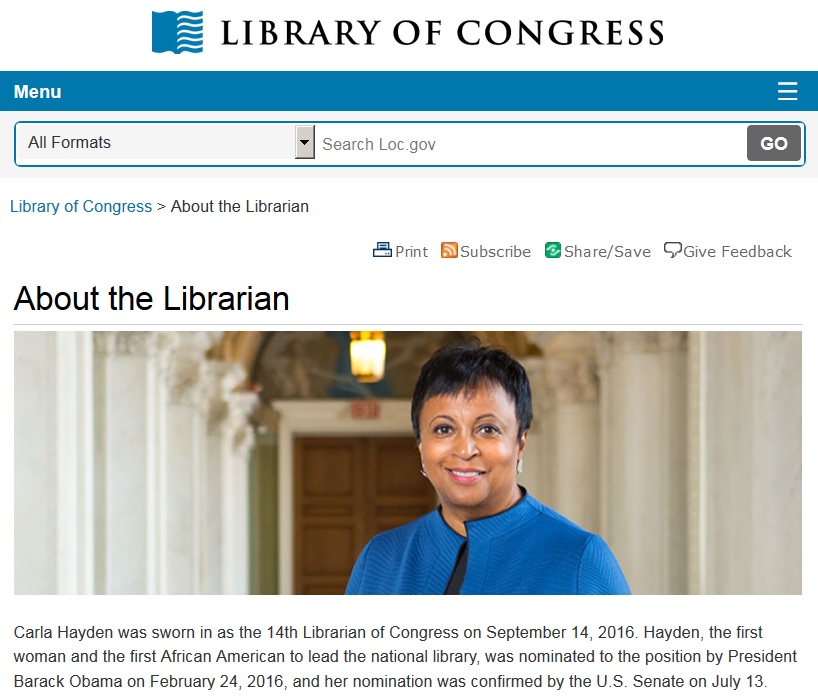 Some of you may enjoy reading and thinking critically about the upcoming changes at the Library of Congress. Carla Hayden, who was sworn in as the new Librarian of Congress, is expected to modernizing libraries and allow for much greater access to today’s digital culture.

The New York Review of Books’ article “The New Hillary Library?” by Robert Darnton, Harvard University Librarian Emeritus, is a thought-provoking read and a kind of a call for action to all critical thinkers in Library and Information Science & Technologies: “this is the time to think big about designing the digital future”. It is evident that he is much disappointed with the visions from the Fantasies of the Library book under review. Yet, he has high hopes for “the [t]wo powerful women [he has no doubt will be] located at opposite ends of the axis between Capitol Hill and the White House [and who] could revive cultural institutions, restore the public domain, and repair the fault lines that run through our information system”.

We need bolder, more outward-looking fantasies about the future of our libraries (Darnton, 2016).

Darnton points out “it is a rare moment when a new regime can realign the modes of communication so that they serve the public interest, as the [US] Constitution originally intended.” He outlines three major problematic tendencies with information access (in the US and arguably worldwide):

“Can nothing be done to dislodge the irrationality built into the system for communicating knowledge?” … “Democratization of access to culture should be a high priority for the new president and the new librarian, but how can they bring it about? We live in a real world of power, wealth, powerlessness, and poverty, where vested interests dominate Congress and the public has little voice in the determination of cultural policies. In fact, much of the world of learning looks dysfunctional if considered as an environment for producing and distributing knowledge.”

“Lawyers and librarians have batted these arguments around for years, and courts are beginning to recognize the public interest at the heart of the litigation. What we need now is a librarian of Congress wielding a big stick and speaking softly but firmly from her bully pulpit on Capitol Hill. Citizens may not be aware of how much is at stake, but public librarians could mobilize support from their constituents. We can imagine their response: Go for it, Ms. Librarian of Congress! Fight off the lobbyists, find the funds, and digitize every book in your collection, or at least every book published during the last three quarters of the twentieth century. Form an alliance with the DPLA, HathiTrust, the Internet Archive, and even, if possible, with Google. Make the Library of Congress a nerve center in a distributed network of aggregators, which will transmit digital texts—of images, recordings, and films as well as books—to every sector of the body politic. Democratize access to our [US] country’s culture.”

What will you do as a future (or current) information professional? What would you suggest? You could leave a reply below, if you wish.

The full article can be found here: http://www.nybooks.com/articles/2016/10/27/new-hillary-library/