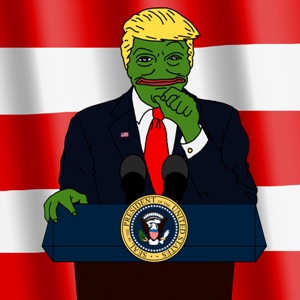 In his opening monologue to the first Saturday Night Live broadcast following the 2016 US election, comedian Dave Chappelle admonished his viewers for electing “an internet troll as our president.” And, indeed, trolls may have influenced this election to an unprecedented degree. Like any electoral competition, this one featured plenty of posturing, pandering, and sloganeering, but unlike most other elections, much of this battle was waged via internet memes.

But what is a meme?

At its core, a meme is a symbol, phrase, or action that coveys meaning from one person to another. Words, images, song and dance – any piece of culture that can be used to transmit ideas can be a meme. Take, for example, the peace symbol: ☮ a circle and three lines that are instantly and internationally recognizable. Symbols such as this can be used to quickly communicate a set of beliefs and values – in this case, nuclear disarmament and non-violence. These symbols can also be used to represent social movements or campaigns, like the hippies, where they serve as signals of group affiliation or support.

But these symbols can also be subverted and corrupted by opposing groups. The iconic logos of many famous brands are frequently co-opted by activists as a form of protest.

This is also a characteristic of memes. Each time a meme is transmitted to another person constitutes a reimagining, a reinterpretation, or a remixing and, even in a world where perfect digital copies are possible, each reading is a re-contextualization. For these reasons, memes can evolve rapidly and spread virulently, and have a habit of taking on a life of their own.

On the internet, memes live and die based on their ability to capture attention. Quippy catch phrases, evocative imagery, and creative re-appropriation are the basic building blocks of a successful meme and political campaigns offer these in spades. Barack Obama has been called the first “internet president” for his campaign’s extensive use of social media and email to raise money and engage with supporters. He is also arguably the first president to successfully leverage internet memes to his benefit. Consider the iconic “Hope” poster created by Shepard Fairey: simple, eye-catching, and eminently modifiable, the image helped to spread Obama’s message fast and far.

Through memes, the public are able to participate in modern elections in ways unheard-of in the past. “The internet has elevated supporters to the role of surrogates, capable of creating their own messages and running their own online campaigns on their social media feeds.”[1]

And now back to Trump.

Though Obama may be the first meme president, he most certainly will not be the last. Throughout this election season, Donald Trump’s outrageous, bombastic campaign has proved to be a veritable gold mine for viral media. Whether for or against him, the number and diversity of memes inspired by Donald Trump has been immense; his jingoistic slogans and unconventional behaviour – even the man himself – lend themselves beautifully to caricature and have proved immensely meme-able.

Like Barack Obama before him, Donald Trump campaigned on the kind of simple, resonant messages that were perfectly suited to the medium of internet memes. By contrast, none of Hilary Clinton’s positions could be distilled into the sort of catch phrase that fits comfortably across a wacky image.

Internet memes may not be high art, but they are highly effective. Like a top-40 pop song played endlessly over the radio, memes have a way of worming into your mind and forcefully occupying headspace. In many ways, elections have always been popularity contests, but rules of the game have changed. Candidates and their campaigns no longer have the sort of tight control over image and message that they used to. The rise of social media and the internet has created a shift in power towards the online, networked masses and the success of future presidential candidates may depend, in large part, on their ability to harness the populist power of memes.